Scenery for the Soul.

For me there are few pleasures greater than the feeling of cresting a hill on a bike. Call me mad, it's just the way I am wired. When the hills are tough and the scenery is nothing short of spectacular that feeling is amplified and takes on a near euphoric level.
Rients and I took off on another little bike packing expedition over the weekend. The plan was to head out from Lake Moogerah and trek to Koreelah Creek camp ground in the Koreelah National Park. The park sits just in the New South Wales side of the border ranges. Resting there for the night we were then to set out for Queen Mary Falls via Spring Mountain and then back through the Condamine Gorge and on to Moogerah. The clues were there. Main RANGES, Spring MOUNTAIN, and a bunch of other mountains that while we wouldn't have to crest them, the foothills and spurs would provide plenty of additional vertical meters.

When we set out the pace was relaxed and very moderate. The lessons from my first experience of bike packing still sat at the front of my mind. The extra weight of gear and the need to back up for a couple of days means that conservation of energy is a sensible idea. I haven't weighed my bike and gear but I think that I would carry an extra 12kg or so. That's about 4 litres of water (which incidentally wasn't enough) and the rest in tent, food, cooker, clothing and spares.

The route headed through Mount Alford and toward Rathdowney skirting the township of Maroon and then along the edge of Lake Maroon. The scenery along the first part of the route was pleasant but once we hit Lake Maroon it turned spectacular. There had been some tough climbing already to this point but it was only a hint of what was to come. We stopped for a lunch break on Burnett Creek. A pretty little spot with shady trees and an area to get off the road and relax. As usual, it was a gourmet stop. Fresh coffee and a hot meal.

Things got progressively tougher from here though. We headed up through the valley created by Burnett Creek until the start of a climb up to Carneys Creek. This was brutal. I was able to manage anything up to 12% gradient on the gravel but after that my high gear ratio meant burnt legs and loss of traction. A surface of blue metal interspersed with red clay hard pack made for very slippery conditions. I walked a couple of the pinches as the climb went on. The heat and humidity had also built up to a very uncomfortable level as well. I had lost sight of the scenery and adventure for a moment and focused on the discomfort in my legs and back from pushing the bike up a kilometre of gravel road in the heat. There was finally a flattening of the way and I could pedal again and it didn't take long for the peace and quiet of the area and the beauty of the surroundings to calm my unrest. 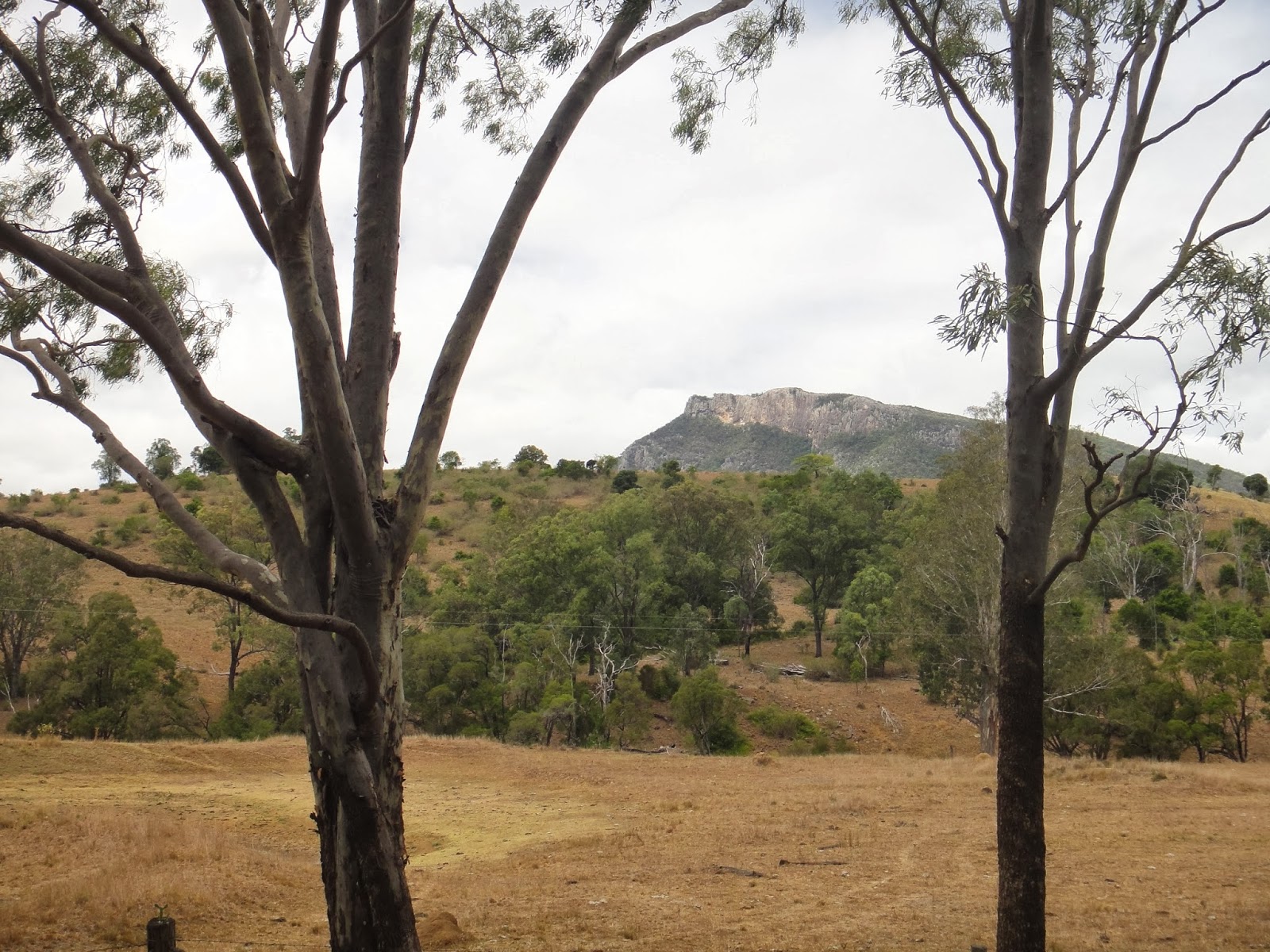 The top of the climb was also the border with New South Wales. I felt pretty chuffed to be there and that feeling only grew as I embarked on a long descent to a cross roads that Rients explained we would return to the next day.

Finally we were on the old Koreelah Road. It was a roll down to the camp ground with little to no excitement other than great company and more gorgeous scenery. I looked forward to setting up camp, taking a dip and eating some food. My water was low but I thought I could fill up at the camp ground. This turned out to be the only flaw in an otherwise perfect weekend. The water in the tank was green. The creek was low. I was starting to stress a bit now as the day had been hot and I had used a lot of water. Fortunately a fellow camper was interested enough to ask what I was up to and then to offer to share some of his water with me. I am forever grateful. Rients had offered but that only promised to leave us both short. Anyway, all good. Tent set up, meal devoured and I was a new man. Well,  I felt pretty good. Rients outdid me though. He had a meal and a red wine. Now that's travelling in style. 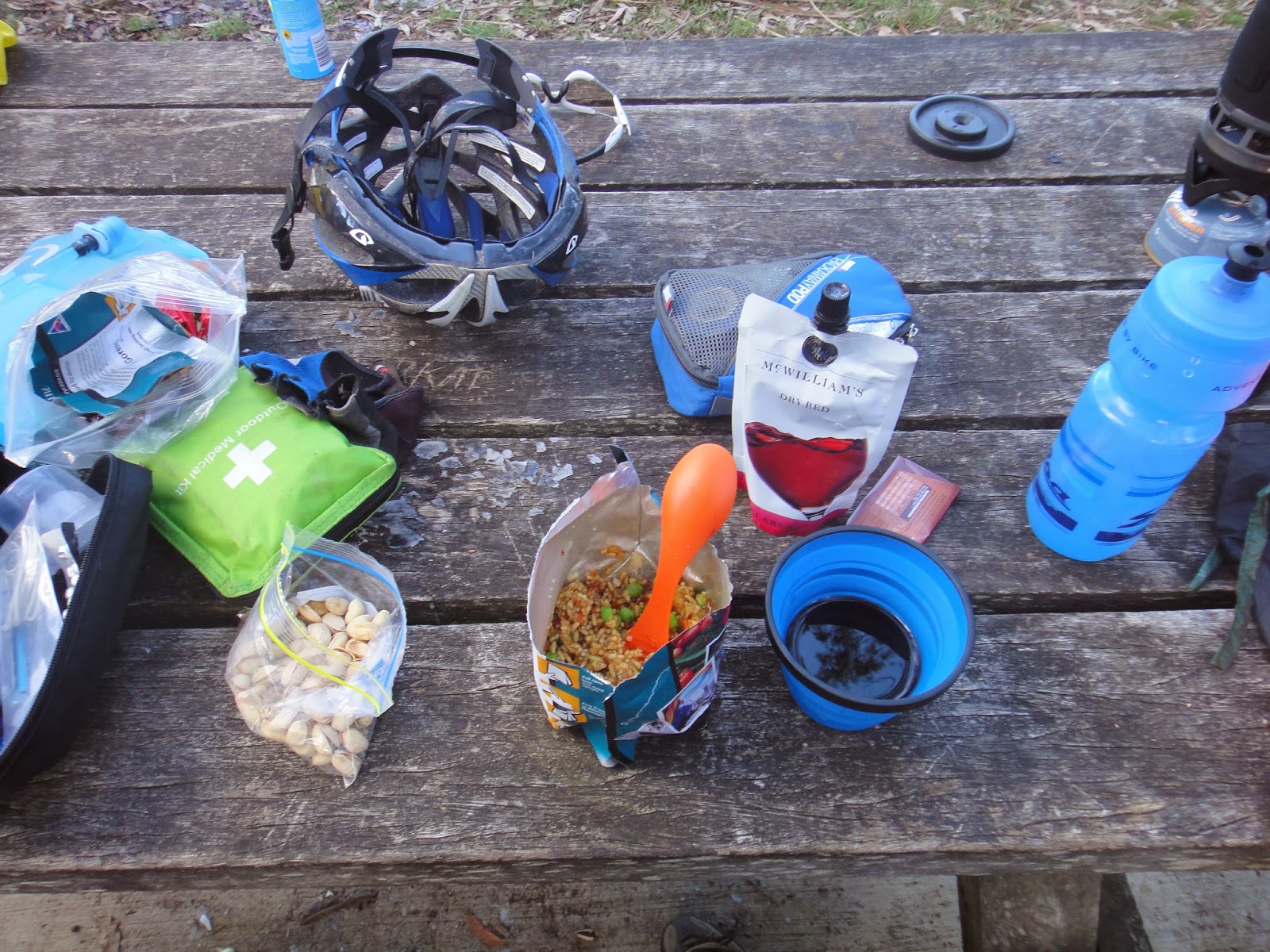 I should mention at this point as a sort of caveat that during Saturday I had received a text from Alison reporting that Rohan had fractured his arm. He was fine but she just wanted to let me know. I was a bit stressed about it but really there was nothing I could do.
It rained for some of the night which meant packing down wet tents for the return trip. No great issue, just a bit of a pain. We were soon on the road though with the day dawning cool but humid. It made for very cold descents! There weren't too many descents though. Head Gate Road was stunning. The forest changed from open eucalypt to lush rainforest and then the rabbit proof fence cut through it and almost immediately we were back in the eucalypts. A short descent took us to the base of Spring Creek Road. From there things got really interesting.


Spring Creek Road was a necessity for us to get water and food. The plan was to go over the mountain and get to Queen Mary Falls and the caravan park there. The first 2k's were a very pleasant  7 - 10% gradient on tarmac and I got a nice rhythm going on the climb. I had been warned it wouldn't all be like this though. As I turned a corner the cliff wall that was 17% gradient awaited me. Discretion being the best part of valour, I got off and walked. It felt like forever going up that last kilometre.

I was getting worried about how long it would take to get back to Moogerah and home to check in on Rohan. The Spring Mountain Cafe provided a rest, great food and coffee (mmmmm, coffee...) and a chance to assess our plan. Rients very kindly offered to cut the ride short by excluding what promised to be a highlight. The trip through the Condamine Gorge. Oh well, next time.

We ate, refilled water and generally recovered for a time. Then came the descent back down to Teviot Brook Road and the detour back towards Moogerah. 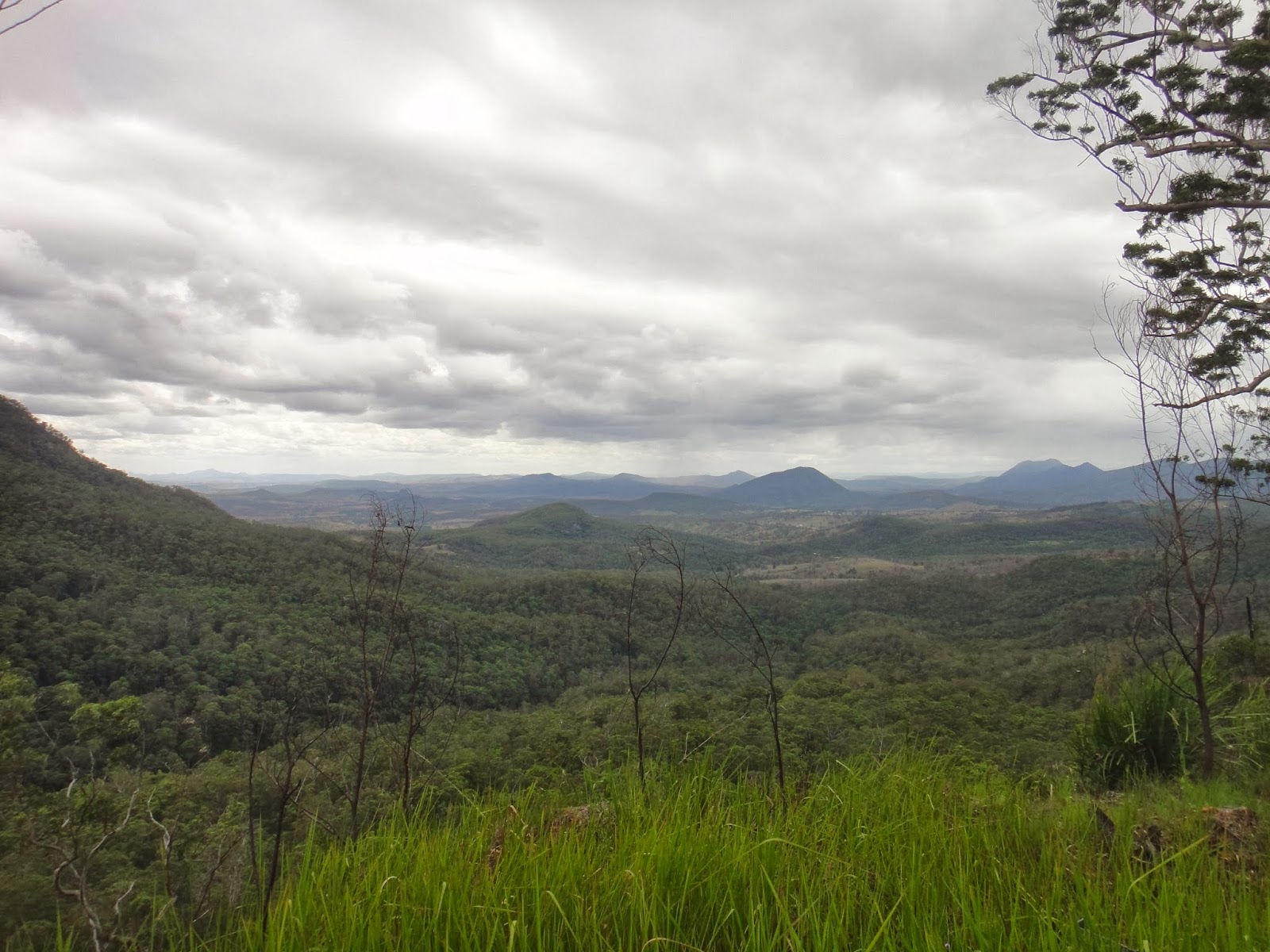 It was spectacular. Massive granite boulders and lush forest following the brook for 10 kilometres.
We eventually hit Carneys Creek Road and then onto Croftby Road. If there was a perfect way to finish a ride, Croftby Road would have to be up there on the list. It rolled through farmlands at a gently descending gradient. The odd small hill was there just to keep us honest but in the main it was easy to maintain 20kph without much effort at all. All around the ever present mountains broke the views with granite bluffs and cliff lines. Gorgeous.

The turnoff to the caravan park at Moogerah came up quickly and unexpectedly. We had been cruising along nicely for the past hour or so and when it appeared I wasn't ready to stop riding. I wanted that can of coke, but I wanted to continue the adventure too. I had been torn when we made the decision to cut the ride short but it was in truth the best idea. After a hot shower, a can of coke and some time off the bike I was feeling very satisfied. A roadhouse burger along the way made for the perfect finish. 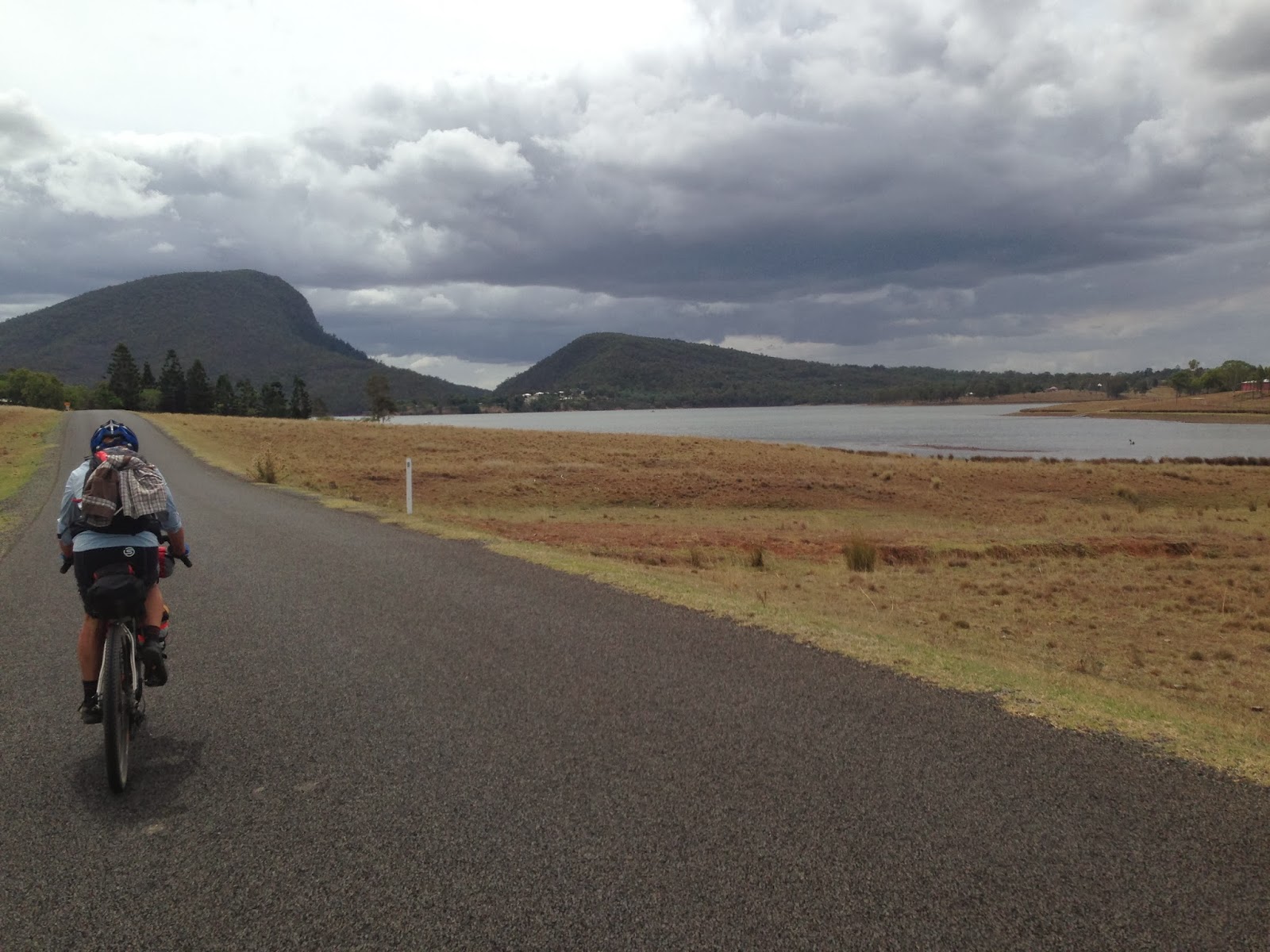 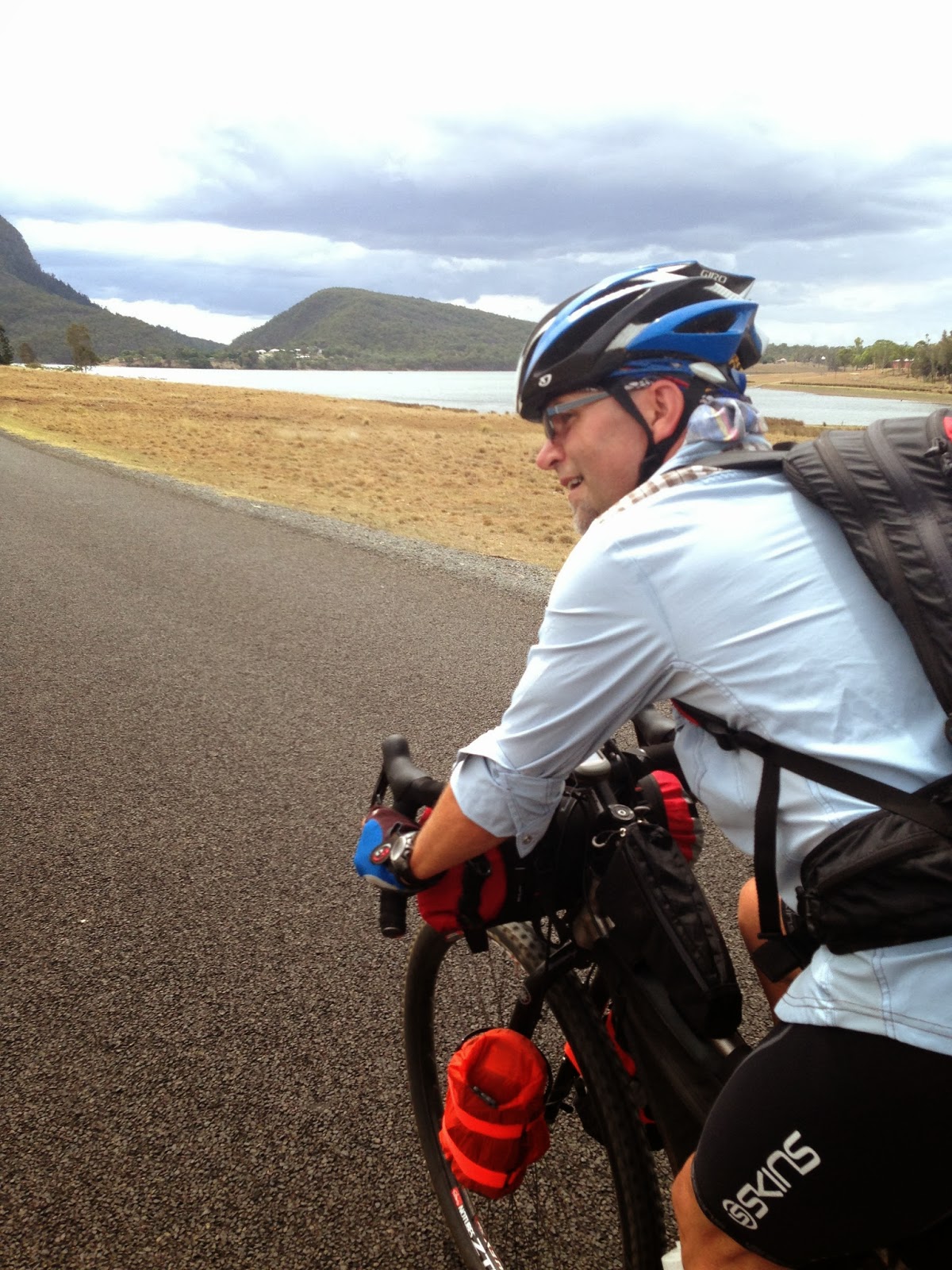 So I crested the hill. I feel the achievement still in my legs and more importantly in my soul. Sometimes my descriptions don't do them justice but the hills were tough. I never wanted to give up though. I wanted to see the next amazing scene laid out before me. 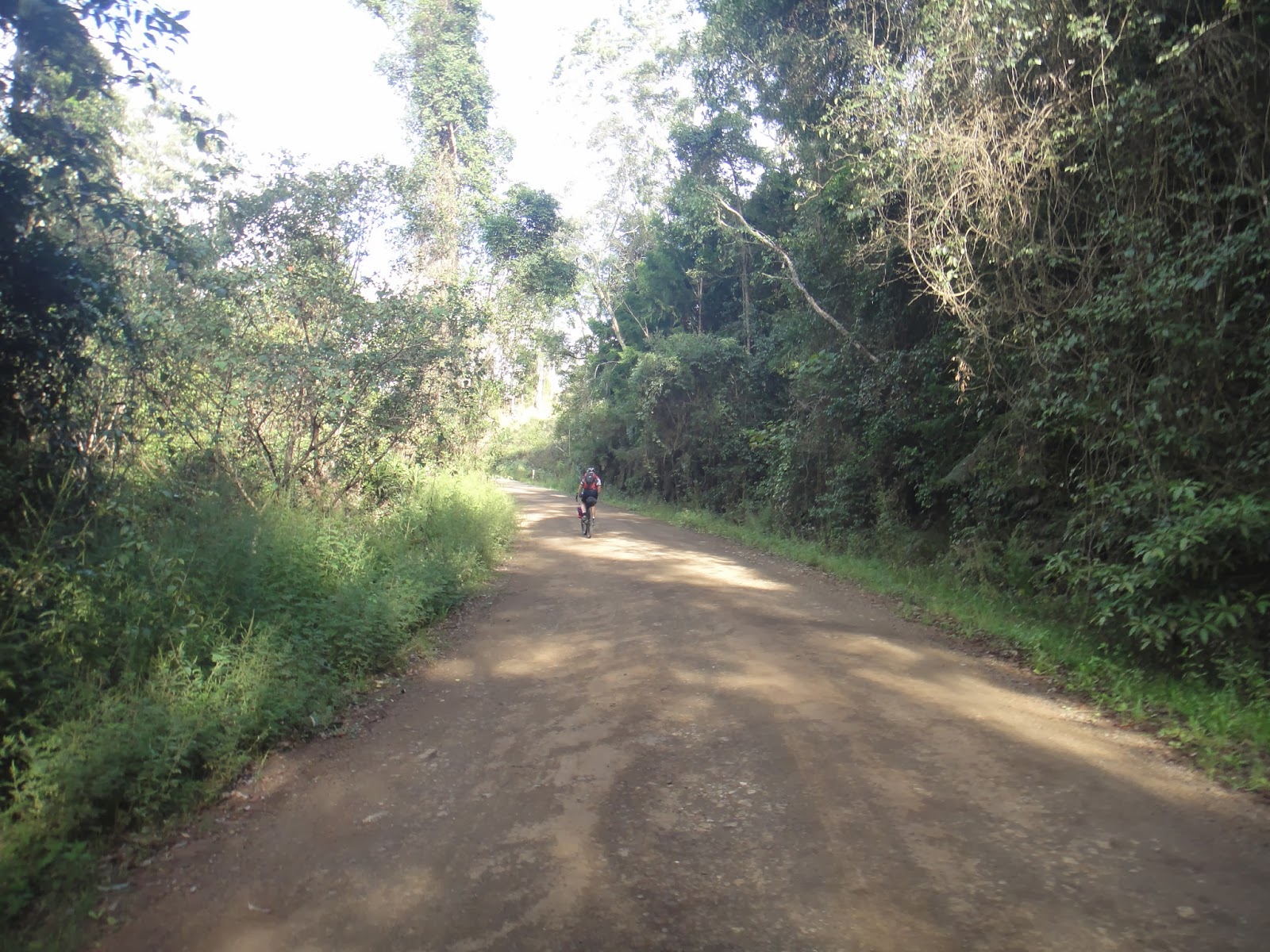 Without these people the wheels stop turning.